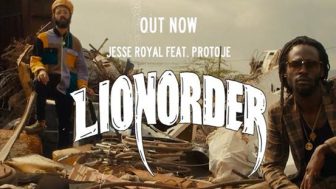 With popular mixtapes, hit singles and his debut album “Lily Of the Valley”, which spent 6 weeks at the #1 spot on the billboard reggae charts, JESSE ROYAL is continuing to establish himself and his unique brand of reggae music across the world.

On friday, he released his new single “LionOrder” feat. PROTOJE via reggae label EASY STAR RECORDS (amassing over 60’000 views over the first 3 days).

The first record from JESSE ROYAL’s impending sophomore album – “LionOrder” taps Protoje, fresh off his Grammy Nomination for “Best Reggae Album” to deliver the positive and constructive messages of watching the company we keep, identifying the strength of unity in our communities and the power to transform oneself and thus the world around us.

Produced by JASON RICKETS & SEAN ALARIC (Koffee, Toian, etc), the riddim is both uplifting and militant – setting the tone perfectly for Jesse Royal and Protoje to enter.

JESSE ROYAL’s restless musical drive paired with profound music, prolific lyrics and socially-conscious messages has him regarded as an artist focused on enlightening the mind of his listeners. His new album is set to be released before the end of the year, make no mistake – JESSE ROYAL’s time is now.