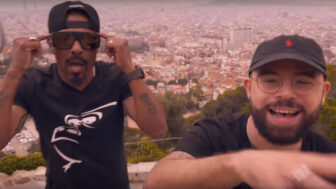 “Lion Science” is the new single of Afu-Ra featuring Sr. Wilson produced by Digital Cut and filmed in Barcelona by Castaka Pictures.

“Urban Chemistry”, Afu-Ra’s last album, is a feat on many levels. With more than 25 years in the game, he continues to push himself artistically and find new areas to conquer musically. And on these 18 tracks, he and French producer duo Digital Cut serve as our guide through raw boom-bap, soulful hip-hop, club-ready pop, somber reggae, and so much more. It’s an epic journey for all involved, and it gets to the heart of what Afu wants to achieve: connection. “My music has always been an effort to unify people throughout the world,” the NYC native explains. “And I don’t think there would be a better way to achieve this then by collaborating with artists from all over the world.”