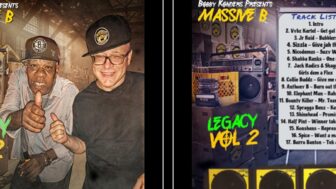 “Legacy Vol 2” is the follow up to the first volume by MASSIVE B’s BOBBY KONDERS, retracing his biggest hits in reggae, which was released in 2018.

“We started Massive B Legacy in November of 2018 and we were pleased with the response, and we wanted to keep it going. So its really about compiling the songs I wanted to put out for the collection. I just went through the catalogue and picked songs that did well over the years,” Konders added.