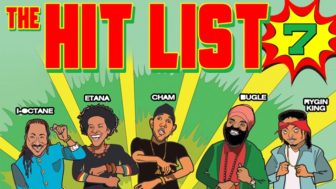 2019 marks the year for diversity and Tad’s Record has produced just with its seventh edition of the popular various artists seriesThe Hit List.

Embracing a wide variety of sounds and styles, the Hit List 7 showcases the creativity and versatility of both the artists and producers. The Hit List 7 features 15 sizzling tracks from nine current hit makers who sing or deejay both ‘rootsy’ and hardcore dancehall music. Etana, Bugle, Cham, Jah Izrehl, I-Octane, Ce’Cile, Shane-O, Alkaline and Rygin King each represent with fire on this remarkable album. Dominating this release is the artist who is known for his ‘uplifting’ songs Bugle and ‘the young icon on the rise’ Rygin King, each has 4 songs on this album.