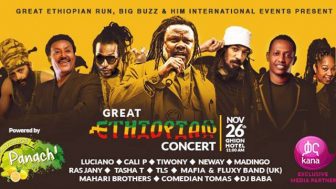 2017 was a milestone year for Cali P. His last release “I-thoughts” not only topped Itunes reggae charts in Switzerland and Germany, but also entered the notorious BILLBOARD CHARTS in the US – an impressive feat for an independent european artist.

The success of his album led him to perform again at some of Europe’s top Festivals, including SUMMERJAM’s MainStage and an electrifying performance at ROTOTOM SUNSPLASH. His musical journey then also took him south to ISRAEL and more recently ETHIOPIA, where he performed alongside LUCIANO, TIWONY and others at “The great Ethiopian Concert” in Addis – Ababa.

AVAILABILITIES: CALI P is available on request in Europe throughout the year and for the summer festival period.