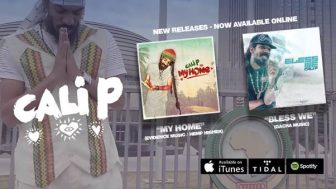 Reggae artist CALI P has been busy throughout the summer: Not only did he deliver electrifying performances all over Europe, but he has been working hard in the studio preparing new material, and even had time to drop some musical jewels during the summer, including a new video shot in Ethiopia earlier this year while he was there was his first ever performance in the country – a milestone in the career of any Rasta Artist.

The track entitled “My Home” was shot and edited by ALLEYEZONIT and shows CALI P walking through different area’s from Addis Ababa to Lalibela or Shashamane. The song itself was first released by HEMP HIGHER PROD & EVIDENCE MUSIC on his 2014 EP “Healing of the nation”

Driven by a warm guitar riff and beautiful wind chimes, “My Home” radiates a heartfelt and sunny atmosphere which wraps the listener in a blanket of nostalgia. This is especially felt and can leave goosebumps when CALI P sings lines like “Mama, you alooone! Mama africa my home”. Additionally, the song is punctuated by a rich female choir which add to the warmness of the track’s african aura.

With its catchy hook and tender percussions, CALI P’s song truly takes the listener on a spiritual and sonic voyage for four sweet minutes. This trip comes to life with the help of the video which shows the beautiful landscapes of Ethiopia’s capital and the beautiful rivers flowing in the country.

And for the fans out there who have been waiting for new releases wait no longer as the lyrical maya dropped a banging new dancehall single earlier in August produced by none other than the Kingston established Japanese label GACHA MUSIC: “Bless We” – where once again CALI P shows his versatility by adapting perfectly to any type of riddim wether it be a roots riddim or a party vibe and delivering an anthem. The thumping Kick and hypnotic melodies are guaranteed to get people moving on the dance floor!

The Japaneese producer GACHAPAN and CALI P where in Studio together earlier this year. “Working in the Jamaica, the Kingston heat was definitley positive – looking at the outcome now, im happy aboit the 2 productions we recorded so far. Gachapan is a kool bredda and i can see the song already making a impact in Japan.” commented the artist. GACHA MUSIC is known for their hit single “12am” with ALKALINE as well as releases with JESSE ROYAL and many more.

The song was officially released on august 8th and has been getting support from Dj’s from all over. Get in touch for your personal promotional copy.

Follow Cali P on social media @Calipmusic to stay up to date with all the latest news and releases!