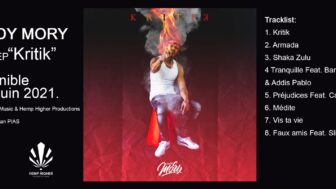 Active on the scène since the end of the 80’s, Daddy Mory is by far the most recognisable voice in french reggae, he developped his skills in the parisien dancehall and reggae soundsystem events before becoming an international superstar with his crew “RAGGASONIC” which blasted to the front of the french music scene in the 90’s / 2000’s with 2 gold records in france only months after their releases.

After 3 albums, both Mc’s of the groupe went their own way and DADDY MORY continued his solo career, and has continually put out what are now “Classics” of the french reggae scene, “Reggae Powa” featuring YANNIS ODUA (2018), “Clarks aux pied” featuring Pierpoljak (2020) or “Antisocial” featuring some of france’s best rappers, have all racked up MILLIONS OF STREAMS on youtube and confirm that DADDY MORY always was and forever will be one of the most revered (and controversed) voices of the french reggae scene.

His “no filter” approach to social media when it comes to music and social issues has put him in several controversies which have led to people comparing him to Jamaican dancehall Legend “Vybz Kartel” as although he gets a constant fight and is often “Boycotted” by the media, people will always keep on supporting his music as his lyrics resonate deeply with his fans.

The result is a fresh and versatile journey throughout different musical landscapes, ranging from DADDY MORY’s classic “Raggasonic” style singing on “Tranquille”, to delivering energetic punchlines on drill influenced beats such as “Shaka Zulu” and “Armada”, or an uplifting dancehall chorus like on “Vis Ta Vie”.

All tracks were produced by RIGA, with co-production from MEDZ on 2 tracks. Additional guitars were added by BERTRAND GUERRA, Bass played by YOHANAN BEKELE, and additional backing vocals by ALEX LEBET. Mastered in Barcelona by XAVI “LEK” FARRE, and all visualy by SICKSHOTS (Raydi & Riga).

Although the project only released today, it’s released singles already have over 500’000 STREAMS combined over various platforms! Make sure you check out the 3 videos released already!