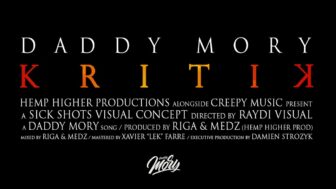 Legendary French Reggae icon DADDY MORY (Raggasonic) is back on the scene and ready to introduce his first single from his upcoming album “Kritik”. The riddim was composed by RIGA & MEDZ and the full album is produced by HEMP HIGHER PRODUCTIONS. the video itself was shot in Senegal a few weeks ago by RAYDI VISUAL from SICK SHOTS VISUAL CONCEPTS, and reflects the rawness and realness of the song. “Kritik” means “Critical” in french – Mory is obviously referring to the times we are living in – as theese are “ Critical times”.