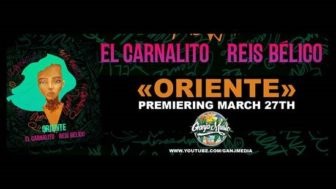 The video was shot in caracas, Venezuela (Reis Belico Hometown) – EL CARNALITO was traveling through Venezuela, as he works on the side as a social worker, and it was on one of theese trips to Caracas that he made the link with Reis Belico, who is the second venezuelan rapper than he collaborates with (his first song featuring PANDESOUSA – also from venezuela) dropped several months ago.

EL CARNALITO started his career rapping in french as ERIAH, and gained notoriety in Switzerland and France by Winning the BEST URBAN MUSIC Award At the SWISS M4MUSIC AWARDS in 2014. After rapping in french for several years, he has decided to come back to his roots (His parents are from Argentina and Mexico and immigrated to Switzerland when he was a young), and he is preparing a bunch of releases in Spanish to drop on the latin market over the next few months…. you might have not heard about “EL CARNALITO” yet, but you will defo want to hear more of him soon!