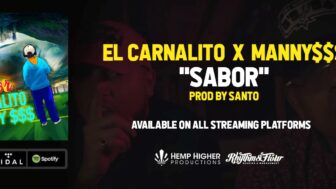 Although he only started dropping songs under his new “El Carnalito” moniker several months ago, he has been rapidly building a small fanbase with already over 10’000 followers on Instagram and his latest videos passing 100’000 views in several weeks.

GIO AMAYA, the Director who shot the video, decided to go with a storytelling concept for this one: filmed in the streets of Bogota, Colombia – the Latin hook sung by AYUN CONTRERAS blends perfectly with SANTO’s hard hitting drums to create a latin rap classic: welcome to la calle!

Growing up bi-lingual, EL CARNALITO started his career rapping in french under another name: ERIAH, and gained notoriety in Switzerland and France by Winning the BEST URBAN MUSIC AWARD at the SWISS M4MUSIC AWARDS in 2014. After rapping in french for several years, he decided to come back to his roots (his parents are from Argentina and Mexico and immigrated to Switzerland when he was a young), and he is preparing a bunch of releases in Spanish to drop on the latin market over the next few months…. On top of that, El Carnalito recently won 1st place on an online freestyle competition organised by the legendary latin group TRES CORONAS which will see him feature on the official remix of their track “Ego-trip”.

You might have not heard about “El Carnalito” yet, but you will defo want to hear more of him soon!