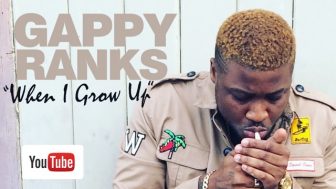 GAPPY RANKS is a houshold name for UK reggae, and by far one of the most prolific artists of his generation. “Pelpa” (as he is nicknamed) recently dropped a new project “Pure Badness” (His 8th Solo project to date!) – With his extensive catalogue, GAPPY RANKS has proven that he can ride any type of riddim, however this new project is focused on a more particular brandluenced contemporary dancehall.

“This lighter approach to the music is counterbalanced by Gappy’s reality lyrics, employed in about half of the songs, including the titular track. This dichotomy between the lyrics and the riddims inspires a deep sense of unrelenting hope in the face of adversity. Pure Badness (…) and similar tracks further my personal perception of Gappy Ranks as one of the most emotionally stirring contemporary songwriters in the world of reggae, if not the world.” Dan Dabber / Reggaeville.com

GAPPY and his team recently released the video for “When I grow Up” – a conscious track reflecting the reality of too many youngters from impoverished areas around the world and the lack of choices that the system gives them in order to better there situation. Produced by DELLY RANKS and composed by KHEILSTONE MUSIC on the “Cotton Swab Riddim” considered by trendsetters to be one of the best riddim releases for the end of the year.

AVAILABILITIES: GAPPY RANKS is available on request in Europe throughout the year and for the summer festival period.