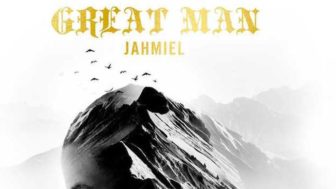 Jahmiel finally dropped his debut album, “Great Man” and dancehall fans have been tuning in.

Jahmiel started talking about his new album titled “Great Man” sometime last year, and the months have been great indeed as our feelings stood neutral pending the project’s highly anticipated release. Now that Jahmiel’s debut album is here, we can finally enjoy everything we were promised including a collab with Tarrus Riley. Since we haven’t been getting much music from Tarrus on his own, he and Jahmiel on a track together is a thrilling idea.

In April, Jahmiel said that he expects his debut album to be ‘great’ (we see what you did there, Jahmiel). “The album is definitely gonna be a great one. It’s produced by two professionals I’ve had great chemistry with over the years – DJ Frass and Chimney Records. It’s going to consist of 12 songs. Jahmiel is known for the deep messages, the positive messages, so you can definitely expect that,” he told the Star.

Of course, Jahmiel doesn’t intend to leave out messages for the ladies with what he deemed as a multidimensional project. “..and the ladies dem love me, so we have songs for the ladies. So expect some up tempo, feel-good music. Me have music for everyone, a variety of music. This album will not be one dimensional,” he said.

DJ Frass, one of the professional producers with whom Jahmiel says he has great Chemistry, also weighed in on the album “We wanted to showcase Jahmiel on tracks that show his depth and diversity outside of what many fans know him for,” according to TheUrbanMusicScene.

The gentlemen’s statements definitely set high stakes for the album’s success, or at the very least its reception.

2. Give Thanks For Life