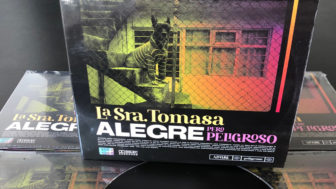 Hailing from Barcelona, the young catalan band has been working hard over the past few years, gaining international exposure all over Europe and performing at some of the continents biggest festivals including Polé Polé in Belgium or Sziget in Hungary (one of the largest festival’s in the world).
The release of their new album “Alegre pero Peligroso” (literally translated to “Cheerful but dangerous”), is without doubt a milestone for the group’s career: Hailed by critics as a musical masterpiece, the album maintains the original identity of the group with songs that combine electronic sounds and latin flavors (which was their “trademark sound” over the past few years) – but also merging with more recent influences such as Trap or Afrobeats. In that spirit, the album also features several major features including BET and MTV award winner Stonebwoy from Ghana, uprising star Coely from Belgium, top Spanish rapper Bejo as well as a bunch of other collaborations (Sr. Wilson, Ahyvin Bruno, Desiree Diouf and Marcio).
Overall the album takes the listener on a musical journey through 11 tracks, flowing perfectly from classic Hip hop loops to heavy bass infused trap songs – the whole mix spiced with a latin / carribean flavor and co-produced alongside one of Barcelona’s top upcoming producers: Genis Trani.