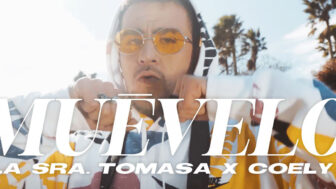 The 7 young musicians from Barcelona have built a name for themselves by skillfully merging electronic and acoustic elements and have once again outdone themselves on this track, by mixing their latin influences with a modern Trap vibe – creating the heavy bass banging “Muévelo”, on top of that – the verse from the energetic and charismatic COELY is literally the icing on the cake – it’s cold!

The visuals were filmed in Barcelona the last weekend before the international covid shutdown by London based director TROY ROSCOE – who sprinkled some of his special effects all over the video – without a doubt, the video and the track will get you moving, hence “Muévelo” (literally translated in english: “Move it”!).