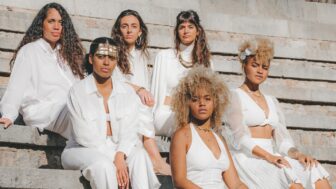 LAS KARAMBA is a Young refreshing band formed by six women hailing from Venezuela, Cuba, Catalonia, Panama and Argentina – creating a multicultural and eclectic mix of sounds giving them a Unique musical identity!

The Band was formed in 2018, amidst the choas, traffic and stress of the streets of Barcelona – the idea was to blend their talents, and showcase how women can empower and help each other in conquering their fears by spreading joy, and by using  their music and message as a way to vindicate the empowerment of women all over the globe.

LAS KARAMBA invite you to take time out to “relax” with their álbum “Camino Asi”, and to take some time out to forget about your fears and stresses for a Little while, and deciding to see the world in another light, with your own rules, following the tempo of your feelings.

The album will be released by Guspira Records on March 4th physically as well as on all online streaming platforms.