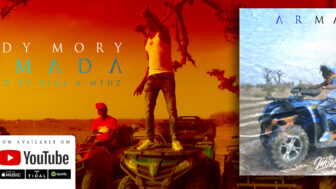 French Reggae Icon DADDY MORY (RAGGASONIC) has been hard at work over the past few months with RIGA and his team from swiss label HEMP HIGHER PRODUCTIONS (Sub-Division of RHYTHM & FLOW S.L.) Together they are finalising the artist’s new album which will be dropping in June. The latest single dropped on friday alongside fresh visuals which were shit in Sénégal (Africa) last month, Shot by french Director RAYDI VISUALS from SICK SHOTS VISUAL CONCEPTS.

On “Armada”, he mixes his timeless flow with fresh new sounds and a “Drill” influenced riddim. The song showcases the artist’s versatility and surprised his fanbase who is more used to hearing him on classic reggae riddims with a small hip-hop influence.

The song was greeted with a great response on youtube with over 15’000 views the first day and was playlistes on APPLE MUSIC’s NEW MUSIC DAILY Playlist for France, as well as SPOTIFY’s top French reggae playlist REGGAE NATION.

The song was produced and mixed by RIGA & MEDZ in Switzerland and mastered by XAVI “LEK” FARRE in Barcelona, Spain. Make sure you check out the video link below:

And here is the link for the first single of the project in case you missed it:

DADDY MORY is available for festival bookings in europe for summer 2021. Please get in touch for more info.

Many thanks for the continued support.