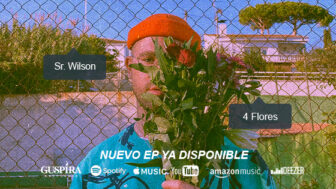 Over the past 10 years, SR. WILSON has built a reputation as one of the most active artists on the European Reggae & Dub scene – with hundreds of performances in europe as well as tours in Latin America, The USA and Japan.

Although 2020 has slowed down the pace of live shows, it has been a massive year for SR. WILSON, who seems to be on a winning streak dropping hit after hit and growing his monthly fanbase to over a quarter of a million monthly listeners. After the success of his last singles “Stay Homa” alongside STAY HOMAS or “My Driver” alongside french singjay / rapper BIGGA RANX, he is ready to introduce his Solo EP for 2020, entirely produced by one of Barcelona’s finest GENIS TRANI. They have been working on this short masterpiece for over 2 years, recording a bunch of demos in order to fine-tune the sound, developing a more personal and fresh sound – which has given birth to this EP “4 Flores” – literally translating to “4 flowers” – as the EP is constituted of 4 amazing songs, including his last 2 releases “Aire” & “Libre” which both were released to popular acclaim. The EP will be dropping worldwide With GUSPIRA RECORDS on the 20th of November 2020 – don’t miss out, SR. WILSON is finishing the year with a Bang!