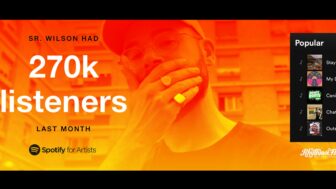 Guspira / Rhythm & Flow signed artist SR. WILSON has been releasing a string of singles recently – displaying his versatility and gaining a lot of new fans, notably with the release of his collaboration with barcelona based group STAY HOMAS with a track entitled “Stay Homa”. The track became an “Overnight success” during the confinement period and gathered national and international attention – shared hundreds of thousands of times around the world.

The song allowed them to perform together on spanish national TV last week and has grown SR WILSON’s spotify online following to over 270’000 MONTHLY LISTENERS. After releasing his first single with SONY MUSIC SPAIN several weeks ago (with barcelona producer BOXINBOX) – SR WILSON is currently amongst the most active independent artists from the barcelona and spanish Music scene.

He developed his sound and fanbase over the past few years in the dub market alongside OBF SOUND SYSTEM (from geneva, Switzerland), and is currently expanding his musical catalog by collaborating with artists and producers near and far – merging styles and influences – delivering constant new music for his ever growing fanbase! Make sure you go and check out his latest releases online: Spotify