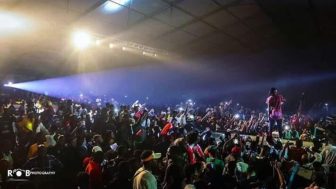 December has been a month for music festivals in Ghana, and the Bhim Nation Concert was one of such shows that music lovers could not afford to miss.

This year’s concert, dubbed ‘Fill the Dome’, generated expectations and hype among fans of the dancehall artiste.

Despite President NANA AKUFO-ADDO’s absence as special guest of honour, for the many who filled the Fantasy Dome inside Trade Fair Centre on Friday night, the show was worth their penny and time.

After a hectic year that saw him deliver great dexterity in his endeavor within and outside his jurisdiction, Ghanaian Born African Dancehall King STONEBWOY wrapped up the successful year with an exclusive concert at the Fantasy Dome tagged, the “BHiM Concert”.

The 4th edition of the annual musical festival show was stagged at an estimated 2,000 capacity venue, the Fantasy Dome in Labadi, the talent heart of the capital, Accra and brought fans of the awards winning Africa Dancehall King together.

This years edition of the BHiM Concert witnessed some number of supporting performances from JOEY B, MEDIKAL, EDEM, KIDI, DARKO VIBES, KELVINBOY and a host of others who entertained fans with their hit songs.

Other International elite artistes such as ADMIRAL T (Guadeloupe) & MORGAN HERITAGE (Jamaica) also got slots to deliver their undiluted talents to the reserved fans before the crowd roared in excitement to welcome Dancehall King, Stonebwoy and his crew who wrapped up the night with their top-notch performances.

The concert was a rather unique offering to fans who have been eagerly anticipating this event, as it provided fans the opportunity to experience the Reggae/Dancehall and Afro-pop sensation without the typical hordes of fans at his concerts.

The event, however, did not disappoint, with “Top Skanka” providing an electric performance that came in three folds, The Liveband Reggae session, Dancehall session and the Afro-Beats session, living unseasonable memories on the minds of the fans.

This year’s edition of the BHiM Concert attracted some Ghanaian elite, the Honorable Minister in-charge of Creative Arts, Madam CATHERINE AFEKU and provided a cool calm ambiance to go with the non-stop music provided by Stonebwoy.

Check out the video review on Ghana music.com below.