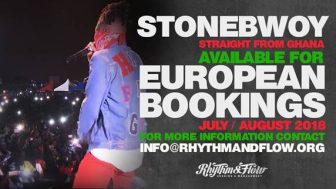 Africa’s Shooting Star STONEBWOY and his team have been around the world and back in the past few months – promoting his exciting new double album “Epistles of Mama” which was voted by over 3’000 Online users to make the REGGAEVILLE.COM 2017 “BEST ALBUM” TOP 3, between CHRONIXX and DAMIAN MARLEY.

Needless to say the sky is the limit for this young artist hailing from Ashaiman (in the greater Accra Region), Ghana. He has just come back from jamaica where he was endorsed by SEAN PAUL, CHI CHING CHING, KABAKA PYRAMID and many other through various collaborations and currently has 2 songs on the APPLE MUSIC REGGAE A-LIST.

He just dropped his new video “We bad (Don 45)” – gaining over 40’000 views in the first day (link below)
It is already the third video available from his acclaimed “Epistles of Mama” album – on top of that, He is gearing up for his summer tour in Europe (where he has already been confirmed for Summerjam amongst others) and is available for bookings in July and August.