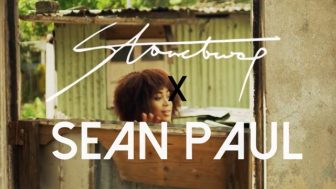 Ghanaian artist STONEBWOY has always been infatuated with dancehall and reggae music, but it was just last year that he first visited Jamaica. Since then, he’s gone back numerous times to work with some of the biggest names on the island: SIZZLA, CARLETON & BEENIE MAN, to name a few.

Several days ago, Stonebwoy premiered one of his most cherished collaborations, his music video for “Most Original” featuring dancehall legend, SEAN PAUL, with TIDAL.

The video was shot by Jamaican-bred, US-based videographer JAY WILL (GAME OVER) and, in STONEBWOY’s words, is “a beautiful story of a ghetto girl and a ghetto guy. It’s simple but very catchy.” Partially shot in the neighborhood of dancehall artist CHI CHING CHING who also makes a cameo, the video combines a cinematic love story and an authentic dancehall party wherein Stonebwoy, smiling ear to ear, grabs the mic. “Right now, a link connects,” he announces, referencing the link between Jamaica and Africa.