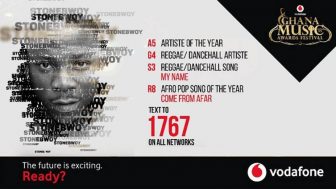 Africa’s most prolific dancehall artist is at it again, delivering a steady stream of tracks and music videos over the past few months – and for those who missed it. His album “Epistles Of Mama” got voted in the TOP3 BEST REGGAE ALBUMS OF 2017 alongside CHRONIXX & DAMIAN MARLEY on REGGAEVILLE.COM

His latest visual “We Bad / Don 45” was released 2 weeks ago, and is the 4th Visual to drop for the album. STONEBWOY is by far one of Ghana’s most prolific artists and it is therefore without surprise that once again, he racks up a string of nominations at the “VODAPHONE GHANA MUSIC AWARDS” including:

Fin our more details on: www.ghanamusicawards.com