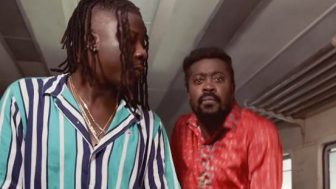 Africa’s most prolific Dancehall act STONEBWOY is at in again, freshly back from jamaica, with a series of impressive collabs. his smash hit single last year which topped playlists “Most original” featuring dancehall superstar SEAN PAUL, The Bhim Nation president now invites another legend – none other than BEENIE MAN himself, to collab on this new release “Shuga”.

The video was premiered last friday exclusively by TRACE TV AFRICA and the track is now available worldwide on all streaming platforms.