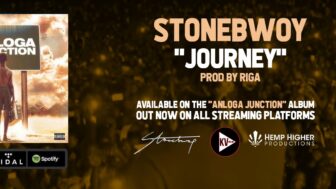 Ghanean Superstar STONEBWOY has released new visuals for his single “Journey” (Produced by Award winning producer RIGA from HEMP HIGHER PRODUCTIONS). The video directed by FAWAZ CONCEPT is a featured documentary style video following the Artist on his travels throughout the world and includes cameo’s from POPCAAN, KERI HILSON & many more…

The video is trending in Ghana (in the top 10 most watched videos of the weekend) and is set to hit 100’000 views before the end of the week. The single is from his critically acclaimed ANLOGA JUNCTION album (BURNITON MUSIC GROUP / KVONLINE TALENT), which has already racked up over 35 million streams over the various DSP’s. and is one of Africa’s most streamed projects of 2020!

Make sure you add the song to your various playlists!