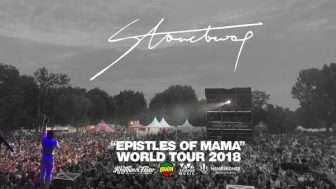 Ghana artist STONEBWOY has successfully returned to his homeland after an incredibly successful tour which saw him perform on some of the greatest stages worldwide, including SUMMERJAM (Germany), SUMFEST (Jamaica), REGGAE GEEL (Belgium) and many more. Prooving to all that African Dancehall And reggae music has its place on the world stage! He is currently back in West Africa ( he performed in Nigeria last weekend) and will be traveling to Dubai in November for the next edition of ONE AFRICA MUSIC FEST in the U.A.E.

His latest Single “Tomorrow” has been gaining traction worldwide and was recently played in front of tens of thousands of football fans at a full stadium in Madrid at the introduction of player THOMAS TEYE PARTEY at the super cup celebration ceremony for ATHLETICO DE MADRID Football club!

Taken from his “Epitles of Mama” Double Album (Voted in the top 3 BEST ALBUMS OF THE YEAR on REGGAEVILLE.COM), the video just passed 1 Million views on youtube, check it out now!

Follow stonebwoy on social media at @Stonebwoyb to stay up to date with news and the latest releases!