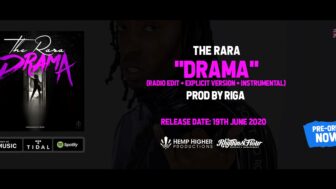 THE RARA was born in South london and raised between the UK and Jamaica. He is also known as “The Females Favourite”, for his charismatic and stylish presence.

The Artist’s instantaneously recognisable sound has sent shockwaves in the UK industry. In 2018 he released his breakthrough hit single “Elegance” which spread like wildfire across the UK and the globe, having a major impact in carribean communities as far as Canada and the USA, with KRANIUM & HAILE (from Uk duo WSTRN) on the remix.

“Drama” is his first solo single of 2020 and will be dropping on all streaming platforms June 19th – the track was recorded and produced in Switzerland by RIGA from HEMP HIGHER PRODUCTIONS, and is the first collab between the two teams.

A heavy bass and a bouncy drum pattern was all that THE RARA needed to deliver yet another hit song for the ladies – which is bound to please fans and Dj’s alike (Radio version & Instrumental included).